I had thought our trip would involve trains and the fast-paced sightseeing that comes with a window seat, but when I looked up the travel time from Lucerne to Vienna on a train I realized that may have been a whole lot of just staring out a window. We debated an overnight train with a sleeper car (something I’ve yet to experience and that sounds glamorous but in reality is probably uncomfortable and irritable-inducing).

Thankfully, it’s not too much to fly from one city to another when they’re close by. 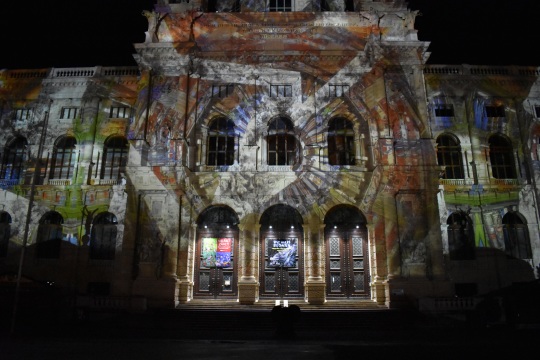 That night I took a walk from our hotel and one of the nearby museums had a different things projected on it.

The lady and I woke up and left our grand life of Lucerne, heading to Zurich airport to fly to Vienna. Our flight was through Swiss Air but fulfilled by Austrian Air. When we boarded the plane my wife and I were both taken aback by how nice it was. It wasn’t as though it was a fancy plane or a glamorous seating arrangement – it was a regular old flight that was just nice. Like a nod to what flying must have been many years ago. There was classical music playing (probably an Austrian composer), the flight attendants were in beautiful red suits/red jacket and skirt. And they were attractive at that (one of them I think my wife had a crush on, a woman with black hair, pale skin, and strikingly blue eyes).

The flight was short and uneventful except for the wife playing the role of the hero. The woman sitting to my left, at the window, had lost her glasses. She told me this and we both glanced around but did not find them. As soon as the plane landed and the fasten seat belts sign was taken away the hero of the day got off her seat, got to the ground, and spotted the woman’s glasses under her seat. Phew. I’m sure that woman heaved a big sigh of relief. Not a very important event, but it’s always good to be a good American ambassador and do something kind.

From the airport we took a train straight to the central station, and from there it looked to me like a not very far walk (pst: mistake). The lady had started down the path of a little cold and she was being a trooper, but was less full of energy than she had at the start of the trip.

Same building, different view, different projection. Sorry I’m not a better photographer – it was really neat in person. (But I did spare you from how chilly it was.)

We walked the 3/4 mile or so to the hotel and experienced our first very cold weather of the trip – the wind was strong and laughed at our jackets, scarves, gloves, and hats. It seemed to find every possible crevice and use that to remind us that winter is no joke. (Up til then the lack of cold had been surprising.)

We got to our hotel and checked in, and we asked about the possibility of seeing an opera. The clerk informed us that there was one the next day but it was sold out, and we could pay extra to get tickets from a 3rd party. The Viennese Opera? Sure, we’ll pay a little extra. The amount she stated was fine, and we were well on our way to being classier and more sophisticated people than ever before.

One little hang up was wardrobe – the clerk informed us skeptically that I could get by on slacks and a button up shirt for me, but a tie would be nice, oh and also a jacket. Right, sure.

With the lady of the house rocking her bit of cold, and our frigid walk to the hotel, soup sounded mighty fine. Our kind clerk let us know about two different spots nearby that had good soup and after dropping our bags and relaxing for a minute we made our way there. With the early flight and walk to the hotel we were treating ourselves to a later lunch, it was maybe about 2 pm.

The cafe where we ate was fantastic (we ended up going there twice in our short stay). The waiters wore nice suits, but it was not a fancy restaurant. There were coat racks right by the door and it was a seat yourself deal that once again drew looks of agitation and judgement from the wait staff when you asked about seating. We both ordered a sausage appetizer plate and soup, and both of us couldn’t have been happier with our meals. I decided that a lot of Bavarian and Viennese classic dishes were like a great burger place – there may not be a huge range or a lot of variety, but what they do, they do really well.

There was a pharmacy next to the cafe, so we popped in and got some cough drop type drugs from the pharmacist who spoke English. Come on drugs, work your magic!

From our late lunch we walked to the opera house to look into a hop-on, hop-off bus line. The tickets would be good for forty-eight hours, and there was a bus leaving just then that would take us toward the Sigmund Freud house (a goal destination of the Mrs.). With little delay we were on the bus and on our way to dear Dr. Freud’s house/place where he saw patients. My wife is a psychotherapist which is why this house had much more meaning and relevance and importance to her. The museum itself was small, it was his house after all, but it had a lot of neat items (his couch that patients used, for example). I would recommend the museum, BUT I think it’s worth reading about Freud first because the museum seems almost oriented towards Freud geeks. It explained things well, but it explained them as though you already knew the first half of the story.

After the museum it was dark out, and the weather had gotten colder. We ducked into a coffee shop to get some drinks to warm ourselves up and scheme on what to do next. I thought walking back to the hotel would be just fine (but remember, I’m ok with a couple miles of strolling) … the wife was less keen on the walk (and remember, she had that bit of a cold) and then when the rain began to fall from the sky chilly as you like, we decided maybe walking wasn’t best.

We managed to find our way, moderately accurately, to a subway station. And after a little bit of confusion we were back at the hotel, happy and warm. The day had been long, and we were wiped out, so we decided dinner at the hotel would be ok. The restaurant attached to the hotel seemed a little fancy, but thankfully without the fancy prices, and I would say definitely without the fancy taste. I had a chicken dish which was bland, but hey, you can’t win them all. I think Europeans in general seem to be less keen on spices than I am accustomed to. My wife was very amused because my plate had a ‘little sachet of lemon.’ It was a lemon slice wrapped in something, and I saw the little wrapping and thought, ‘there must be cheese in here!’ so I untied it only to discover a half a lemon. Talk about a crushing blow. The chicken and my taste buds were happy with the lemon, though.