Let Me Get My Special Racing Shoes!

This was perhaps a theory developed by racing against my mom, or dad, or sister, and beating them while wearing my Special Racing Shoes.

Or, equally possible, I had bestowed this quality of speed improvement abilities based solely on how cool they look.

One day my brother (who is seven years older) and I were talking or maybe I just interrupted a conversation he was having with others – I have no memory of the conversation – I just know the outcome was him saying “let’s race” and me saying “let me get my Special Racing Shoes” because, ipso facto, I was going to win. I was excited. I knew I was about to win and this was a thrilling thought to beat my 11 year old brother.

Shoes on, laced up (Velcro-d?), ready to rock. And your mark. Get set. DREAMS CRUSHED.

My brother did not slow down one iota. My Special Racing Shoes became … sneakers.

Fast forward twenty-five-ish years. I’m running regularly and trying harder than I did even while in high school cross-country and track. I’m actually placing at running events (in my age bracket that is). And what do I owe it all to? My Special Racing Shoes!

When I go for a regular jog I wear a pair of New Balance shoes (I pretty much always stick with New Balance for jogging) and la de da I trot my merry self along until I become tired and not that merry and then questioning of my sanity and angry and then I near the finish and I’m pumped and I can do this! and then I’m burnt out and I’m tired again and just. want. to. finish. and then there I am, done. And I am a-ok with the idea of another jog. But on race days … oh, on race days I wear a different pair of New Balance. A pair with practically 0 drop and very little support (I reserve these for 5ks and 10ks). With these puppies on I’m not unbeatable, but honest to goodness, I tend to run faster.

A newer version of my race day shoes.

Why? Well, with the different shoe design my body has a good reason to strike the ground differently (more a mid or fore-foot strike).

A necessary caveat: I have read various articles about running and rearfoot vs mid-foot strike and the conclusion is … inconclusive. Some articles say one is better, others say the other. In my opinion, it’s whatever works best for you. For me, I think when I focus on striking with mid-foot (vs my usual which I feel leans slightly rearfoot) I am faster because I’m focused on hitting the ground and getting my foot into the air quickly. The difference may purely be a result of higher cadence. Here’s one example article that says I’m dead wrong in saying midfoot is better.

Whatever it is, my dear friends, it is the magic of the Special Racing Shoes. 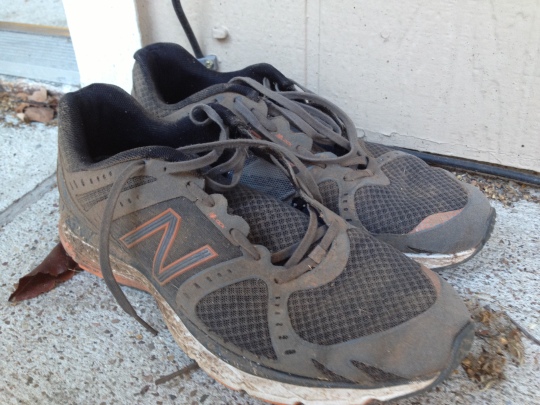 After 360 delightful miles with these puppies, I say adieu. (Yes, I am a dorky engineer/runner and I keep track of the mileage on my shoes.)