Lego, You’ve Let Me Down

I can’t believe I said that. And, ready for another statement that doesn’t fit me? Today, I’m going to write a sincere post. Criticizing Lego. Lego!! I love those toys! But, they’ve ticked me off.

Recently Lego has introduced “Lego Friends,” Legos designed to appeal to girls. Check out their homepage versus Lego’s – and already it’s annoying.

Where to begin? I guess I’ll start with a disclaimer. I’m a white dude in the US, so I’m the worst possible source when it comes to talking about feeling like anything is stacked against me. Nevertheless, here I am about to complain about a new Lego marketing scheme and how I find it sexist.

When I was in high school, I wrote for a local paper that was written entirely by teenagers. Another writer for it now writes for Time, which is just plain cool. I was trying to think of an article for the paper, and my sister suggested an idea. Look at the colors at a toy store, how the aisles are so clearly steered towards boys or girls. I noticed and thought, yeah that stinks but it makes sense. Kids get their idea of what they should be doing from their parents, and society, and I don’t want to get too far into that but frankly I think people should play with whatever toy they want to.

I didn’t write an article on that because it was a sincere, intelligent topic, and I don’t think I’m well-enough equipped to do that. I brushed it off as it-is-what-it-is and moved on. 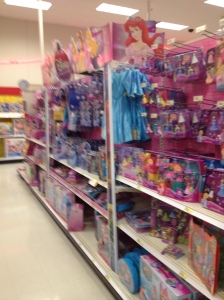 It really stinks, though, with science toys. Science toys are boy colors! Yes, science and engineering fields are dominated by men, but you know what?, steering girls toward kitchens and boys toward super cool beakers that when you add stuff oooh it’s changing colors or bubbling or check out this volcano stuff explodes out of it!! kind of reinforces that trend.

Legos are boy colors. But, they’re Legos!! Everybody loves them! When you go in a Lego store, it’s all happiness! Look at these things!

Then, one day at work, I found out about Lego Friends. These purple-draped boxes assault the eyes when you walk in the store. Yes, Legos were already “boy”-oriented colors but by having a set that is so catered to girls, the whole store is now divided. Those awesome Star Wars, ninja, Harry Potter, pirates, and city Legos are for boys, and these purple-boxed houses, and puppies and sunshine are for girls.

That really annoys me.

You can make a house, and puppies, and sunshine in the same colored boxes as the other Legos! Why do they need to be different colors!

I was saying this rant at a store just a week or two ago when I actually looked closely at one of the boxes. You’ve GOT to be kidding me! Check out the Lego here, versus the traditional Lego. 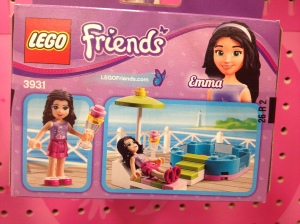 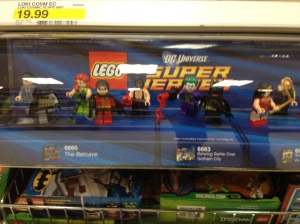 They have thinner arms! Well, the whole thing is different. The arms stuck out to me the most. There are girl and boy figures that come with the set, and both have the new build (so Lego isn’t saying girls should have thinner arms than boys), but I still find it obnoxious.

I wrote this because I’ve already given this speech to a couple friends in real life, and I’m still annoyed, so I figured I’d rant on my blog (how appropriate). I am still going to be happy when I look at Legos, and occasionally buy some despite being an adult without the excuse of having children (although if ever questioned I always say it’s for my nephew). BUT, I would be happier if Lego would drop the new color scheme.

Shoot, put all the Legos in plain, boring-colored boxes. They’re LEGOS! They’re still the coolest toy out there right now.

Oh, and also, Lego, if you’re listening, when you put an age range on the box, you don’t need to specify an upper age. I’m an adult buying Legos, I already know I’m a grown child, you don’t need to reinforce this by telling me I’m buying a product intended for ages 6-12, I’m well aware.

I’ll be back to the regularly scheduled mindless drivel tomorrow.