And Now … (Here’s a fun song I found, listen while reading?)

Day one of sightseeing began the moment we stepped off our flight into Delhi. The airport customs people were a familiarity: surly. The charms of airport employees, especially those on the midnight shift, are global. We touched down at around 1:30 am, waited for our bags (a sweat-inducing amount of time), and then met our travel agency representative. First things first, the representative asked how we managed to show up 24 hours late. Gee, thanks. I took out the documents and explained. From our representative we learned how our trip would be setup: fancily. We had no idea we were in for feeling as fancy as we would, and while in the end we decided the trip was richer than we would normally do, it was nice and we justified the richness with it being our honeymoon. The fancy set up was this: in each place we would have an agent, a driver, and a guide. The agent would take us to/from airports or help us with the hotel. The guide would go around sightseeing destinations with us and talk to us about what we would be seeing. The guides we really liked we also talked with about cultural differences between the U.S. and India, which was fascinating and really enjoyable. We got to the hotel sometime between 4 and 5 am, and after check-in, showers, and getting settled we were in bed at 6 am. When asked the night before (well, that morning) we said a 10 am meet up with our guide sounded great. We would only be in Delhi one day and we wanted to get to see as much as possible. Throughout the trip Lauren and I had the outlook that this was probably our only trip to India, due to cost and the world being such a big place with too many sights to see. This helped us, at least for a while, to fight the desire to sleep and instead sight-see.

After a three hour nap we got up to have breakfast at our hotel. Throughout the trip we knew that each day breakfast was included, which made that meal easy to plan for. We both ordered juice (pineapple for her, orange for me) and the ‘Indian breakfast’ which turned out to be puri, or poori (the bread), with … something. We thought it was paji (pajee?) but I can’t find that when Googling so … From there we met up with Punam, our guide for the day. I have to admit, I was surprised it was a woman. Based on what I had read before the trip, I had made the incorrect assumption that every town would have a male guide. I was mostly right. Delhi and Mumbai (the two biggest cities by the way, this is probably not a coincidence) had female guides, the rest were male. Punam took us first to Qutab Minar. I will go ahead and make a blanket statement: we saw a lot of very old and very beautiful structures, to the point where from the start of the trip to the end I began to understand how people could take these for granted. I had asked Punam about what seemed to me an absolute lack of security at the site of Qutab Minar, aren’t people afraid of vandals or people mistreating these beautiful artifacts? She had a joking response, they’ll take them seriously after they’re 1000 years old. For a U.S. citizen, this is crazy. (There are some very old Native American structures, but only a few have stood the test of time.)

A brief note about Qutb Minar (because this is just cool): a Turkish ruler came into India and took over a northwest region, then, inspired to continue his conquering ways, he left. In his absence he left a slave in charge, Qutb-ud-din Aibak. It was this man, a slave turned ruler, who began construction of the Qutb Minar (alternately spelled Qutab Minar). The tower’s construction began in 1193 and was completed by Qutb’s successor. In 1368 another story was added, bringing the monument to a height of 72.5 meters or about 238 feet. From there we saw an old well, and got to experience an active search for tips. The guide explained this well to us and then told us to have a look around by ourselves. We climbed up to the top and wandered from there, coming upon two people hanging out. One was wearing normal clothes, the other a security-type uniform. The man in the uniform pointed out some steps to us which we walked up, leading to another great view (where we could see Qutb Minar from far away). The uniformed man then treated himself to following us all the way back to the car, hanging around while our guide talked more about the site … The uniformed man wanted a tip, I guess, for pointing out a pretty obvious staircase. Nah, we’re good.

This isn’t anything in particular, I just thought it looked neat.

Later we stopped by the presidential palace where we saw monkeys out running around! To us this was very exciting, since we don’t normally see monkeys out and about. From our guide: “the monkeys are reincarnated politicians, continuing to monkey around with the government.” A theory I think anyone can get behind.

With the presidential palace behind, looking out you see the India Gate, a memorial to the British Indian Army soldiers lost in WWI.

Lunch involved a shocking sight. We had a delicious lunch, and our guide told us about former visitors who had brought a full suitcase packed with toilet paper and food – we were cautious and brought wet wipes, snacks and tissues, but not that cautious. How could you not try the local foods!? The food and the chit chat ended, and both Lauren and I decided to use the bathroom before heading out (one of our goals for the trip was to avoid needing to use public bathrooms). There was a long line, and after a bit the reason presented itself: Between each use an attendant would run inside and briefly clean! Are you kidding me? The bathroom warranted a picture when I went in. That stuff all around the edges? Flowers.

Bathroom flowers, to weird out your guests.

From there we got to go on a rickshaw ride through Old Delhi. The day we were there happened to be a special election day. Months back there was an election, and the results were close enough to warrant a second election to clear things up. We learned that voter turnout is very high compared to US standards, and for that special election the turnout was 67%. In addition, we noticed some things that were quite different from the US:

And from observation, we noticed that a lot of shops were closed. Our ride through Old Delhi still had a lot of folks walking this way and that, people playing chess, people sitting outside sipping tea, but almost no stores open through the Old Delhi markets. As it was, we rode through and got some stares. (More so when I had my camera out, dopily filming while staring at everything. Can I blame people for staring at us when a big part of our trip was spent staring?) 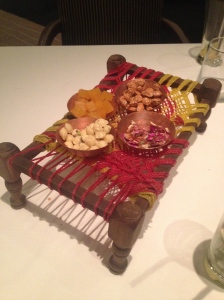 After saying no thanks to dessert, they brought us this little tray of complimentary dessert snacks.

The night closed with dinner at our hotel. The dinner was great but we were so exhausted it didn’t make the slightest bit of difference if the food was good or bad, we just wanted to eat quickly. At around 8 pm we were out cold. The next day we’d be waking up for a flight to Varanasi, and a chance to see the Ganges in the afternoon. Delhi High: Our guide, and talking with her about this and that (Lauren in particular prepared for the trip by reading 10 or so books by Indian authors, so she had a lot of great questions which our guide happily addressed) Delhi Low: The shops all being closed in Old Delhi Photo of the day?: Check out these insanely low doctor prices. 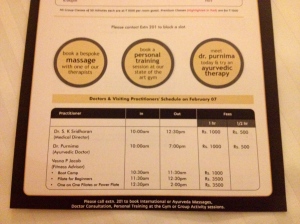 Shocking fact of the day: A DOCTOR coming to YOU for 1000 Rs for an hour. Which is all of about 16 dollars and 22 cents. Eat your heart out, America.