Crud, Cows and Cremations Or … Varanasi

Crud, Cows and Cremations Or … Varanasi

Varanasi has two impressive facts: it is the oldest, continuously inhabited city, and one of the holiest cities in the world. Take that, Texas City, Texas! (I have nothing against that place, but what a dull name.)

Lauren and I woke up, showered, packed, and headed to breakfast. Breakfast this morning was a British comedy, by which I mean funny … but a slow plot. (Sorry Brits.) Lauren and I were in the lovely dining area where one other couple sat; as we waited two other couples arrived. Each table seemed to struggle with ordering. And the place was small enough that every couple heard the waiter-couple interactions at each of the other tables.

Me: “Orange juice, please.”
Lauren: “Orange juice as well, please.”
Waiter: “Ok.”
(More ordering, and then the waiter leaves. A minute later …)
Waiter: “We don’t have pineapple juice this morning.”
Us: “…Ok.”

At another table someone ordered orange juice, and when repeating back the order their waiter switched it to pineapple juice (the very same juice we’d been told they don’t have.)

At another table someone ordered one food item and the waiter repeated a food item to verify what they’d said. Only, he repeated a completely different dish. “Scrambled eggs please.” “Omelet?”

Out of fear of ‘Delhi belly’ (which I discussed before) Lauren and I decided to order foods we were more familiar with to ease our bodies into the local foods. I ordered scrambled eggs. As you can see in this picture, these were not the scrambled eggs I was expecting. They were decent, but boy oh boy were they creamy.

But hey, this is about Varanasi, right? So let’s get to that.

We arrived in Varanasi and got off the plane on the tarmac (something I always enjoy). With bags in hand we found our agent, holding a sign with our names on it, and a big cheesing smile on his face. He struck me as a delightful, naturally nervous man. On the forty-five minute to hour ride into the city he told us who our guide would be, what we’d be seeing, and a bit about the town and the holy places we would visit. 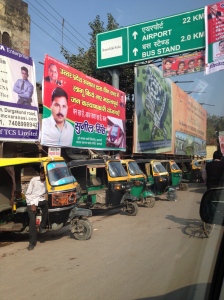 I don’t know that I saw a single political ad poster where the person was smiling. (Also, I think? this is a political ad?)

First up was Sarnath, the place where Buddha gave his first sermon after achieving enlightenment, and thus the birth place of Buddhism. Due to my cultural ignorance, and bad sense of humor, I couldn’t help but picture Bill Murray in Caddyshack talking about the Dalai Lama, so in my head I was saying in my best impression of him, ‘so there I was, right, hanging out with the great, great, whatever great, grandkids of the deer who listened in on Buddha’s first sermon, just taking it all in. Learning Buddha stuff and all. Which is nice.’

From there we saw a museum full of artifacts from Sarnath, including an amazing statue of Buddha. I’d attach a picture, but no photos allowed there.

Pictured here is the Dhamek Stupa, at Sarnath.

While in the museum, absorbed by the amazing statue, I heard suddenly a lot of shuffling. Oh, I thought to myself, it’s some group and to pay respect they are walking up in some humbling fashion that is forcing them to sound not quite like walking but … maybe they’re on their knees walking up? I don’t know let me – I looked and saw it was a class field trip, just your average group of kids who don’t pick up their feet enough when they walk because … that’s uncool? I don’t know, why do kids do that?

There were a few things in that museum that I think were fun enough to mention (besides that amazing statue that I keep saying is amazing without saying anything about why). After the shuffling kids walked up I would regularly glance up from looking at a museum item to find them openly staring. Not mean stares, just stares. If I had been bold enough to ask for a picture with me and their class, I bet they would’ve happily obliged (in return I would’ve had to pose with them). I told Lauren my strategy, inspired by feeling awkward over looking up to find people staring at me so much, “Lauren, I’m going to start telling myself that people stare at us so much because we’re just too good looking for them not to stare.” Brilliant, eh? 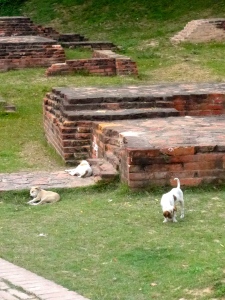 No walking on the ruins! … Unless you’re adorable

I was in my head, feeling uncomfortable over the stares, when suddenly I couldn’t help but stare – a TALL, very white, shaved head bald fella with glasses and a pleasant face wearing a monk’s outfit came walking up to view that magnificent statue and … who is this guy? What … is he? The big weirdo!

Aha!, eh self? How judgmental are you? My thoughts then went as follows, in quick succession:

From Sarnath we went to our hotel for a brief break, and then to the Ganges that night and the next morning. This was nice because there were beautiful sights and I learned some things about Varanasi and the Ganges River.

The Ganges River flowed down from heaven and to prevent it from overpowering Earth Shiva used his hair to … I’m not sure, slow the tide I suppose? In Hinduism, it is believed if you are cremated (the preferred burial method of Hindus, and they prefer it in a traditional manner) at the Ganges then you are released from the cycle of reincarnation or moksha. Basically, it’s a straight shot to Heaven.

Because of this river’s stature in the Hindu religion, there are frequent cremations in the city. As you ride along in a boat on the Ganges you see people bathing in the river, grabbing some water and just splashing it on their face, people washing clothes using the river’s water, and at the site of cremations, bodies covered in white clothes burning beside the river while men who were connected to the deceased stand nearby until the body is completely burnt, and then an important person to the deceased will carry a piece of the body to the river. People from lower castes provide the lumber for the ceremony and clean up after the body is done burning (and as we were told: there’s not officially a caste system … but there’s a caste system).

People washing clothes in the Ganges

It was fascinating to watch, and extremely intrusive feeling. Here we are on a boat, going slowly by, while any number of families stand around a loved one burning, saying goodbye. Of course, because of the strong belief that this is leading that person to peace in the ever after, there may be some calming aspect to the ceremony. Our guide simply requested that as we approached that area for us to not take pictures (by looking at other boats, not all guides request this). I was happy to oblige, wanting to do something to feel less like an awful gawking human being. Heya pal, let me use your tragedy to learn more about your culture!

For the morning boat ride we saw the sunrise, which was amazing, and we heard something profoundly creepy. Thankfully I had a heard about this creepy item.

A group of Buddhist students, and their teacher, were seated on the steps of a large building right next to the Ganges. It was a beautiful sight. The teacher had a loud speaker to lead his students, who were seated a good 30 feet away or so. He was saying this and that, things we didn’t understand due to, you know, different languages, and then suddenly a forced, spine-tingling laughter was emitted from the teacher and all of his students. This is an accepted exercise in helping your lungs, but boy does it sound like a super villain plotting things. 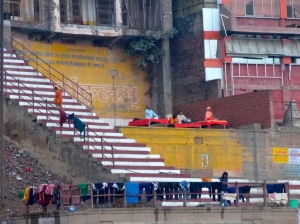 A child running toward the laughing teacher to ask ‘what is your bidding, evil emperor?’

Now, what’s with my title? Where is the mention of crud and cows?

In Delhi we saw cows, but Varanasi had both the scene I expected with cows and extremely shocking things. As you walked along busy streets, cows would amble along casually.

Expectation: People would see a cow put just one foot on the street, think, oh it’s the holy cow!, stop their car and wait patiently for the cow to cross before moving on.

Reality: Cars, auto rickshaws, cycle rickshaws, bicyclists, motorcycles, buses, trucks and pedestrians all zip by the cow, beeping if they’ve got a horn.

Expectation: Cows would be cared for and loved by all, which of course means eating well.

Reality: Random piles of garbage in the city limits and outside the limits, with cows often chewing on garbage (and presumably eating it). It was for this reason we elected to avoid dairy through the trip. Really and truly – piles of garbage!, being eaten by this holy animal! I can’t tell you how shocking this was to me. (Some people buy normal cow food and put that out in cities.)

Like many places we saw in India, the flowers at our hotel there were amazing.

Sorry for the long post, folks. But stick with me for one last story, and possibly the highlight of Varanasi.

At our hotel we had dinner with other guests (who were delightful, hello Belgian couple and Bill and Nancy from Canada – not that any of you are reading this). Bill and Nancy suggested we ask our guides and folks we interact with about themselves, their marriages, their family, all that stuff.

Inspired, on the drive to the airport I asked our smiling, nervous agent a question to open the topic.

“Yesterday you said after working with us you were going home to your wife? How long have you been married?”

And so began an amazing story. Our happy, sweet agent was expecting a child in just a few days. He and his wife had a ‘love marriage’ which is not an ‘arranged marriage’ or a ‘love-arranged marriage.’ He defined ‘love-arranged’ as a match that is a love one but the parents also happen to approve of. In his case, neither his nor his wife’s parents approved of the match. Fear of their parents disapproval (or, rather, the fear of the parents acting on this disapproval) led our agent to getting married and having this marriage be a secret for a YEAR. A whole YEAR! And now, with a child coming soon, he hoped that the beautiful baby would mend fences and help bring his and her parents to see them in a different light. 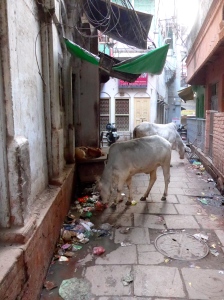 Yes, the cows eat garbage to get a taste of all things disease-ridden. That’s proactive immunity, folks!

It seemed throughout our trip that we saw evidence of more ‘love marriages.’ This, at least from one guide, was the fault (yes, fault in that guide’s opinion) of girls going to college. The guide supported education for girls, but did not like the break from tradition. While in college these young men and women meet, they’re more away from strong familial influence, and relationships can happen.  It seems like that, amongst many other things, were signs of a lot of change happening.

Low: Our guide (notice how I didn’t really mention him?)

Up next: Agra (home of the Taj Mahal, that old thing)

Here’s the statue I kept mentioning: I don’t know why, but this statue just seemed calming. The curves in the statue were so fantastic … It was the most natural looking statue I’ve seen.

More Bang for Their Buck