It’s a few days until the kiddo is 7 months old and I thought I’d go ahead and get a start on this post. Hopefully, dare I say it, finish it today too.

This month I had a personal success which was abandoning the idea of reading a book. I had checked it out from the library and it was just eh. But I kept on. I would read a few pages before bed, feel disheartened at how much there was to go, and pass out. But then one day – BOOM – I said NO MORE. I re-read an old comic book series instead. This may seem like a non-accomplishment, but giving up on a book is a challenge for me. Now I’m reading The Handmaid’s Tale. 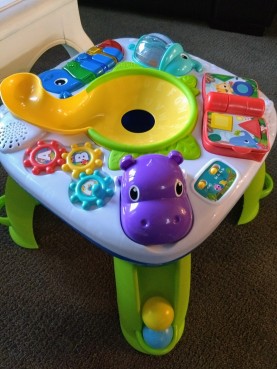 I have also learned I am much more inclined to spoil the boy than myself. Frivolous spending ahoy!

I have mentioned this before, but the doc advised we keep the kiddo out of day care for a long time. Multiple docs at the NICU suggested a start date of April. And, with flexible work, my wife only working two days a week, and very helpful grandmas, we will accomplish that goal!

Part of that involved me taking vacation days on the two days a week my wife works for three weeks. One of those weeks was during month 6, but two of the weeks (four days of kiddo and dad time) fell during this past month!

One day the kiddo and I headed to the library, a little shop, and then a tortilla shop (they make delicious burritos) so I could load up on food before a long nap drive. The library was fun, the kiddo LOVES the front facing Bjorn (a new delight in life) and he will kick his legs and or give huge smiles when excited. And he is a little charmer and flash a big smile at strangers no problem.*

From the library we head to a few little shops (including buying my wife her Christmas gift – BOO YAH PREPAREDNESS) and the interactions with strangers continue. It is always ladies, or old men. Never men my age or really any male I’ll say between 10 and 75. This was ESPECIALLY true at the tortilla shop where I am surrounded by construction workers. Not one ‘aw look at the cute baby’ instead just stares like I am an alien. I will say that I don’t think I ever noticed another dad and baby. I noticed moms and babies, and moms and dads and babies … but no dude and baby. What’s the deal, fellas? Why so lazy?

That was a lot of chatter. Let’s do some quick highlights.

The sleep stuff continues to be pretty good … He had occasional nights where he would wake up and have a long cry, which is BRUTAL because of our ‘sleep wave’ method where you don’t really do much to comfort the kiddo. But for the most part it has been great.

My mom was in town this past week and my wife and I felt very nervous about the sleep. It’s one thing to feel bad for your crying baby when it’s just you … but to have your mom 10 feet away while your kiddo cries and you stare at a timer? Oof. We ended up ‘cheating’ a few times this past week which actually felt pretty great. My wife rocked him back to sleep and put him down in bed between us. Waking up next to his tiny adorable body was fun. Another night I went in about 5:15 am because he had woken up (and we prefer him to sleep till 6), I rocked him to sleep then just snuggled with his tiny head tilted 6am. And this morning my mom is out of town but he was having a rough go from 430-5 am, so my wife fed him then laid him between us. We all woke up naturally about 715am and he looked back and forth between my wife and I, taking turns reaching his little hands out to squeeze our noses. It was very odd, and delightful.

One thing that has helped and hurt his sleep is that he is now rolling from his back to his tummy. When he rolls onto his tummy and is happy about it, hello glorious sleep. When he rolls onto his tummy and feels regret … one of us slips into his room, rolls him onto his back, and then sneaks out. Generally this leads to a tiny brief cry and then calm. The odd thing is he KNOWS how to roll from tummy to back, but it’s like he suddenly finds himself in that position and says ‘WHAT HAVE I DONE!? WHAT IS THIS PERSONAL HELL!?’ 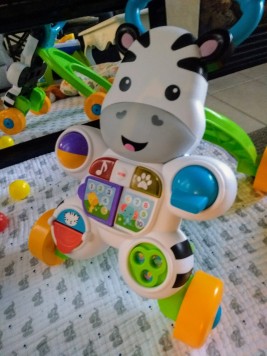 Semi-pictured and also a new favorite thing: the mirror! We have one on the floor for tummy time social hour.

He also often has a pretty intense workout regime before falling asleep. You go through the routine, put him down (described in last month’s post) and then he rolls around, chews on his hands, chews on his lovie, rolls back and forth a few times, sometimes onto his tummy and then off. It’s a lot of work going on. My wife said he’s like a gymnast making sure he uses the whole floor space.

Another fun and simple pleasure in life is discovering him figure out his thumb. Before he would generally suck on his middle and ring finger (I don’t know why). This month he has figured out, I guess, how to pop his thumb out because boom, that is a new favorite too. His thumb is basically a slightly large tic tac, so you generally hear a lot of slurping when he is using his thumb.

A funny thing that is happening this month (funny to me that is) – he is very easily distracted while breastfeeding. My wife used to be able to call someone or watch TV while feeding the kiddo. Now? If she even coughs while feeding him he’ll look up at her. It could be a blank look, or a sly smile, or outright laughter on a few occasions.

Speaking of laughter – his laughs are more common now. Here are his favorite things … my impression of a chicken, crazy chase games (where I hold him and pretend to chase his mom around, then she chases us back), and one glorious time where my wife dropped a toy of his (a ball) and then kept hitting it instead of grabbing it to pick it up. He laughed at her. Genuine, honest to goodness, I’m laughing at you, not with you. It was glorious.

I recognize that this post is insanely long but you know what? A few more.

I was at a Costco on one of my dad-and-kiddo days. I was wearing the Bjorn and had finished my shopping. (Including two slices of pizza and a soda to go for my lunch-nap-drive.) I headed to the bathroom with my happy shopping pal (he loves Costco … well, he seems to love about every location where he can people watch and/or chill in the front-facing Bjorn). I walked inside and, keeping with my constant chatter when walking around with him I said, “ok little mister, let’s do this.” I also happened to notice at that moment a stall door was closed. It delights me to this day to think a stranger was sitting on a Costco toilet, and that stranger thinks he overhead someone talking to his penis … and that the penis was nicknamed, “little mister.”

Ok a few quick hits: he’s had a bunch of different foods this month! Peas, spinach, green beans, and peanut butter. Not surprisingly, peanut butter was the only hit.

He has also had little slivers of solo sitting. Normally my wife or I sit like we’re doing the old grade school sit-and-reach (which I think I could usually reach about to my knees, I’m not very flexible), and then the kiddo sits so that he can balance on either leg and won’t really fall. He has probably hit up to a minute or two of solo sitting. Look out world!

And last but certainly not least this month were two visitors/babysitters/grandmas. Both my mom and my wife’s mom came out to help us extend the kiddo’s daycare free life to seven months. Pretty fantastic. It’s going to be heartbreaking to drop him off at daycare soon, especially since he has just recently entered a ‘stranger danger’ phase of life (previously anyone could pick him up, now if someone else picks him up he locks eyes on my wife or I). But, it is amazing that he got to spend so much time around family. And my wife and I are very fortunate to have such kind moms, and ones who are able to afford to do us such a big favor.

Ok sports fans. This one was truly a blog post just for me. Til month 8.

*Except today. This was pretty funny to me. My wife, the kiddo and I headed to a downtown area to check out shops, walk around, sip coffee, and just enjoy the day. The kiddo is in the front-facing Bjorn and we are in line at a coffee shop. Two college aged girls walk up and one of them gets relatively close and says, ‘your baby is gorgeous!’ She gives him a big smile and for the first time ever he does not smile in response … he gives her a huge pout and a little semi-cry. She looks aghast, seems genuinely hurt … and I start laughing. I kiss his little cheek till he cracks a smile. The rest of the day out smiles, and smiles, and smiles for any and all strangers. Random ladies stop and ogle and talk to him and he grins and kicks. The mystery of the sad-face girl will live on. I wasn’t laughing at you girl, I was laughing at the situation. (She was wearing overalls, maybe he thought they were his.)