The Carousel of New Parenthood

I’m casting side glances toward my son in his swing, full of fear and dare I say hope? No. Because I have no hope. The theme, dear future self, of month 5 (by which I mean starting at 4 and ending when he turned 5 months) … is sleep.

Sleep. What do you talk about when both parents are awake at 3:23 am? Sleep. You talk about his sleep. You ask, ‘when did you last feed him?’ And the mrs. responds, ‘like 10 minutes ago …’ then you sigh and get up to dance the kiddo back to sleep and she says, ‘wait! No! I haven’t fed him since midnight.’ Then if you weren’t so sleep you’d smile, but instead you just plop back into bed and thank the good Lord for the fact that only women have a milk supply.

(And now he is glancing at me. I just looked up and I saw his little eyes staring right at me. Oh dear.)

It has been a huge month in terms of sleep development for us. Here’s the rundown, as far as I remember.

We hadn’t been anxious to do any ‘sleep training’ because his poor stomach had been a nightmare. But with that a little more under control we decided to start making progress on the sleep front.

First up, we started putting him down for naps in his swing. Prior to this his naps were on one of us. Cozy? You bet. Productivity inhibiting? Most certainly. Helpful for his ability to sleep without a warm body and a heartbeat to listen to? Perhaps not. This effort started on a weekend and at first resulted in quick wake ups. He’d be put gently, oh so so gently, into the swing and I’d sit down glance at my wife and smile and then a look of terror would cross her eyes followed quickly by a smile. The kiddos eyes were open, and he was grinning at seeing dear mama.

But in a short order, before the end of the weekend, he took a nap in the swing for over an hour. OVER AN HOUR! Do you know how long it had been since both my wife and I had been able to just be still at the same time? It was glorious.

From there we took an adventurous next step – naps in his own room! Well, friends, it felt like freedom (after it took hold). Such freedom.

But then it stopped. The progress vanished like that. My wife began holding him for naps again but no, that won’t do either. If you wanted him to nap for more than thirty minutes you needed to do more than just hold him – you also need to walk around bouncing gently. I have done this a few times (yesterday I danced gently for 2 hours while holding him in the bjorne). Great nap, painful shoulders. My wife found a blog post from a woman who experienced the same thing. We had so many things in common it was great to read – especially since she mentioned the nap woes were temporary.

Our son, and the fellow bloggers kiddo, were going through a big development jump. Suddenly way more chatty and tons of extra movement. This blogger talked about how the kiddo was so invested in being awake because there is so much to experience! Well, how can we fault our smily, quick to be fussy, overly tired, chatty, kick-punch champ baby for wanting to be awake when his parents are just so fun?

There really is comfort in seeing others having gone through the same pain, talked about it, and mentioned that it ended.

At night he was still inclined to need a lot of effort to get a nap in, but his bedtime routine was great … mom would feed him, I’d walk around holding him while humming and he’d pass out after some period of ‘hey dad! Let’s hang out! Hey dad? Hey dad! Hey dad! … Dad. Dad? … zzzzzz’

(Another live update – after ten minutes of intense, creepy staring he knocked back out for fifteen minutes. And then I heard a little noise and sure enough, we have eyes. I’m now intently staring at my computer. Meanwhile my wife is texting me from the basement wondering when the coast is clear for her to use the bathroom. The tiny tyrant rules all.)

Fast forward to about a week ago and my wife wants us to take a next step in the nighttime sleep department. It’s wise, and the right thing to do, but I don’t want to rock the boat. But what is parenthood (in my limited experience) if not a series of never-ending opportunities to feel comfortable for a moment only to realize this is exactly when things are needing to change?

The plan was to put the boy in bed at night … while he was still awake! Revolutionary! This is a modification of a plan we read about online where you would put the kiddo down drowsy but awake, he/she would begin to cry, you wait a minute, pick the kiddo up, put them down as soon as they stop crying. My wife was all for this. I responded, “he’s a BABY! Let’s do BABY STEPS!” (This made her wonder if she is going to be the one to punish the kiddo because I’m a softie. I think we will both have our areas.)

I had been cheating (unknowingly) and laying him down asleep. In my mind, ‘very drowsy’ is what he was after being asleep for a few minutes. Honest! This is how it would go in my mind – he falls asleep, you put him down, the movement wakes him up, he glances around, thinks ‘eh I’ll cry later’ and then boom he’s out. We did our first actual putting him down awake last night and it took a while, but after many pick-up put-downs he finally honked out for real. We celebrated by eating ice cream in bed. It was glorious.

Oh yeah and other stuff happened this month, too. He is grabbing stuff much better with his hands (reaching out to grab things). He is finally getting a better head of hair (not yet at birth level but close). He GIGGLED! MY GOD. How could I have forgotten that? Ok, sure, no one else would recognize this as a giggle … it’s a whisper of a giggle. Instead of a big grin you get a big grin and a … gurgle? Some happy guttural noise? How do you describe it? Anyway, it is my new motivating factor in life. One day he made this noise while sitting on my belly when I sat up making funny noises. This meant I ended up doing sit-ups for giggles. How weird is that? 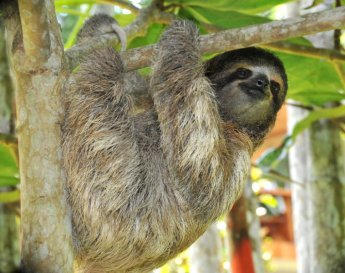 Speaking of sit-ups – the child is making me fitter, I think. He’s the only workout I get, and my arms have benefited from his maybe 15 pound body.

Another fan favorite is ‘tree sloth’ mode. I have my arm under his belly, his legs on either side, his arms randomly pulling at my wrist, and he gnaws on my finger like a champ. It is essentially the world’s most adorable curl. I like to pretend that I am diseased and he is just some form of flesh eating bacteria that is growing on me. (My wife is perpetually delighted by my charm.)

As my wife said recently, ‘the pool of love is deep and intense.’ It has been a month of struggles and triumphs (as every month has been). Thus the title – parenthood truly is a carousel ride of ups and downs, and often, somehow, a smile throughout the ups and downs.

Ok well this blog post is so long no one except me will ever read it.

(And for completeness. He has been asleep for an hour! Thank the fickle God of Naps and Greying of the Hairs. Is this the sign of him re-embracing naps, or a random gift to toy with my heart? Time will tell.)