Fun with the Fam

This past weekend a cousin of mine (who helped inspire this world famous band) introduced me to a new game: Telephone Pictionary.

The idea is that person 1 writes down a phrase, person 2 looks at the phrase and draws a picture to capture that phrase, person 3 looks at only the picture and writes down what phrase he/she thinks it is supposed to represent (so if you’re perfect at this then person 3’s phrase matches person 1’s phrase) … Like I said, Telephone Pictionary.

Each person has a stack of papers and a pen and you’re off. You could have only one person write phrases/draw at a time but that’s boring.

Here are the results of round 1 of the game. The initial phrase is mine.

My other phrases were tougher: “shhh, don’t make this weird” and “history is bunk.” 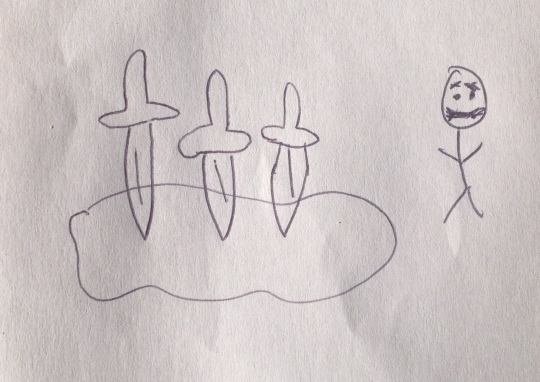 Swords in a puddle, the guy added to represent a confused look (my question mark was maybe a little mean) and … see what happens?

And now death is in the picture.

This fella on the boat is supposed to be death. TALENT.

“Death” with his sickle has become a fishing caveman.

(Also the above picture really is an unintentionally decent drawing of Captain Caveman.)

And the final drawing … Which is basically the exact thing anyone would draw when hearing the phrase “swords in a puddle.”