At my son’s daycare they send ‘incident reports’ if he gets banged up. The most recent one was, “[your son] was sitting on a friend, and the friend scratched his face.” The led me to conclude I wouldn’t last a day at daycare.

Month 8, Or Get Up, Come On Get Down With the Sickness

I’ve done it again where I waited a bit to write about month 8 and now month 9 is on my mind (this funny new face he’s making! Oh and he’s doing the … stick your tongue out and … how do you describe it? Make a fart noise with your mouth. Oh and such progress on his crawl attempts!) … But no, this is month 8. (Also, as a reminder to myself, that means from day 1 of month 7 to day 1 of month 8.)

THE MONTH OF DISEASE.

The kiddo started daycare, going only on Tuesdays and Thursdays, and I dreaded it greatly … but he seemed to be ok! I will say, in the last 2 or so weeks, he is more inclined to be upset when I drop him off even though someone holds him pretty quickly. That’s miserable, but they do try to comfort him which is nice to see (yeah, I maybe loiter and stare through the window).

Daycare day 1 – ok, didn’t nap but survived, that night puked a ton, mom caught a fair amount adeptly using her body to absorb it (i.e. not intentional in the slightest) and dad hopped out of bed to help out

That Friday, my wife texted me around noon talking about how awful she felt and how she might ask me to come home early. I said ok, keep me posted. About 1:30 (?) I head home also feeling a little off, hoping I might be able to take a nap soon … nope, my wife has been yacking like a champ. Uh ohs.

I watch the kiddo while my wife rests/naps/showers/possibly yacks more? The kiddo and I had some low-key fun (read: I did as little as possible to keep him content because of feeling poorly).

About 5pm, I put him down, run to the bathroom, and appoint myself as mayor of yack town. My wife hears our dear boy starting to cry, comes downstairs, hears me and says, ‘oh no.’

I was on about a four hour delay of what my wife was going through.

Here’s how it went. First, you were off. Then, you were cold. Then freezing. Then suddenly very hot, and that was the sign it was time to make your way to your nearest porcelain pal. THEN! After that bit of fun, why, you felt GREAT! For about 20 minutes. Then repeat.

It was a miserable, miserable night for the three of us. The next morning the kiddo got up at … who knows, 530? 6? I got up with him and thank goodness he either felt off as well, or was the world’s most understanding baby, because he let me just lay beside the pack n play while he played or spaced out for almost an hour.

As the day went on I was able to eat, and Sunday I woke up feeling more human. Oh, but wait, is that a tickle in my throat?

DAYCARE. You … you factory of sick. You container of gross. You germ-infested cesspool with cute babies and sweet teachers. (I finally went to the doc after about a month of having a cough … turns out it takes a 6-week course, but I did get some drugs because my fever and sore throat were returning for round two.)

Enough whining. Let’s get to some fun stuff.

This month I had a hiking backpack that I bought for myself arrive, and we used it as well! It is about 3 times as wide as my profile, so I look a little funny when wearing it, but it’s got a big seat for the kiddo and he loves it! For the first week or two, battling illnesses and bad weather, we didn’t use it except to wander inside the house. Then, maybe two weekends ago, my wife and I went to a little hiking area which is all flat and I was pointing out birdies, and chirping, and trees, and the green coming back this time of year and … oh, he’s asleep. It was nice and toasty out and that rhythmic rocking must be soothing. Still, my wife and I got to do an hour or so walk which was great.

Also this month – we had our first tooth arrive! And shortly thereafter, tooth number two! There was a lot of drool preceding these little guys, and now that they are here, I have to say … good LORD. The chomp strength on this tiny human is no joke. Before I’d let him gnaw on my hand to his heart’s content, now it’s like some sort of weird Russian roulette. Because he’ll chomp, chomp, chomp, and then BAM, really gets his little teeth into you and they leave a mark. Prior to my kiddo having his two little teeth I always found it strange/slightly creepy looking when a baby had just their first few teeth. But with my son it’s of course adorable. This proves one of two things: my son is more adorable than all other babies (possible), or it is yet another case of being the parent is a blinding experience (also possible).

The kiddo is also now hitting things for fun occasionally. He’ll take a block and really just beat the snot out of it on the kitchen counter. He also will occasionally smack my arm while I change him …which is fine compared to … WRESTLEMANIA! (Credit goes to my wife on that name.) With the kiddo’s ever-growing desire to crawl it seems like we are getting fewer and fewer calm diaper changes. You put him down on the changing pad and boom, he’s flipping over and up on his hands and knees. You pick him up, put him back down, do one snap or two on his outfit and … gah, child, no, stop, stop … He’s back over. I don’t know how a little guy is that slippery but it’s really difficult to prevent the flip. He’ll also grab a hold of just about anything within reach. Have some drawstrings on your hoody? Boom, he’s got that. Hey dad, is that something covering my penis to prevent me from peeing on your face? Yoink! Looks tasty! It is an entertaining, adorable, and surprisingly not that frustrating battle.

The kiddo also began his crawling endeavors this month. He managed to get to the classic crawl pose (as mentioned above) … and then he sorta … stayed there. He is definitely making progress. It just seemed as though the classic crawl pose arrived all the sudden and then there was confusion with what to do with it. Do I fling out my legs and get frustrated? Hmm, let me try that for a week and see. Oh, how about I kinda just plop my head down between my arms so it looks like I’m doing my evening prayers? Sure, I’ll try that too. He is making progress, I am just so anxious (and terrified) of him making it to the grand next step of actually moving. I would love for him to figure it out, because I am looking forward to him being on the ground and excitedly moving rather than looking around with frustration at a world that’s just out of reach.

And this post is wicked long, so I’ll mention in passing he is also able to sit independently much more. Put him in the poppy and he’s golden … for a minute, maybe 2 or 3, then oooh I’d love to chew on the tag on this boppy or hey that baby in the mirror looks cool I’ll go attempt to headbutt him.

That’s all for this old man.

Until next month. If disease doesn’t kill me first.

Recently I dropped my son off at daycare for his first day there EVER. Woah! First let me say that my wife and I are spoiled: he didn’t start daycare til he was just over 7 months old (fantastic), and the daycare seems to be great.

Leading up to this, in the past month or so, our son had begun to show little hints of ‘stranger danger’ signs … Meaning he might look askance or be a little worried or uncomfortable if someone new was to hold him. This had created in me a real dread over his first day. The night before his first day the closest approximation for what I felt was akin to knowing you would be breaking up with someone. Yes, it was the right thing to do, and yes, it was good for everyone, but in the short-term … woe is you, woe is me.

I knew, and know, that my son is likely to roll with this change better than I am. But the morning was a fun one. 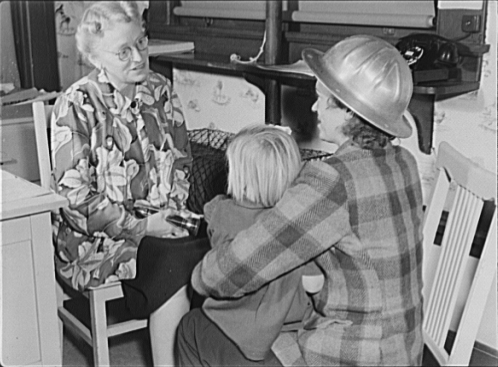 All of the people from this wikipedia picture on daycare look uncomfortable … which seems accurate.

Driving to the daycare was short, we’re only about 10 minutes from there. And from the daycare to my work it’s another 10. I talked to the kiddo about his day with occasional abrupt changes of topic.

I was genuinely surprised after so many almost-starts with crying that I didn’t shed a single tear with the drop off. I think figuring out the logistics distracted me, and a few things had gone a little wonky. (Where do I put the car seat? HOW DID THIS MILK SPILL FROM THIS STUPID BOTTLE? Ew gross, get that runny nose baby away from my baby.) Overall, the drop-off … happened.

Dad Strategy number 1? I feel like I should have one given the name of this post. Hmmm. Here it is: cry, don’t cry, whatever, it’s all good, just don’t stare your child in the face while handing him to someone while crying (that was a worry).