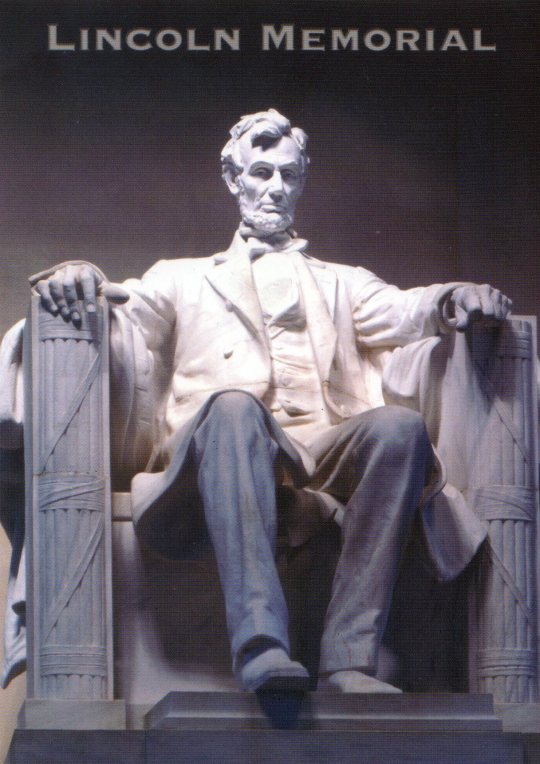 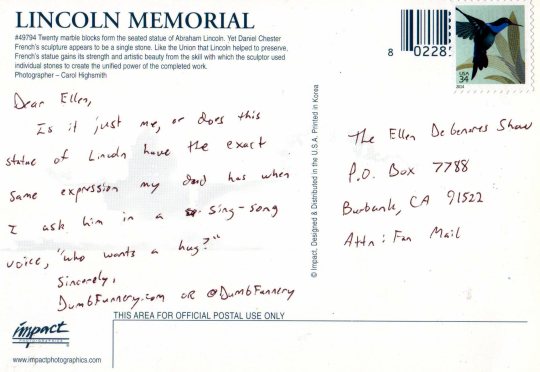 Is it just me, or does this statue of Lincoln have the exact same expression as my dad has when I ask him in a sing-song voice, “who wants a hug?”

Not too long ago I read Lincoln by Thomas Keneally. I decided to read the book because I was heading to Washington, D.C. and the Lincoln Memorial is one of my favorite places to visit. Apparently the Penguin series of biographies focuses on brevity (so there’s a good chance this is the smallest biography of Lincoln that isn’t intended for children). 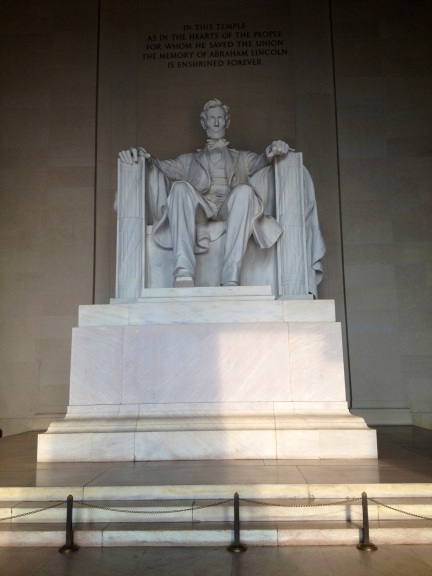 For me, a favorite D.C. activity is waking up early and jogging around the mall with Lincoln being a definite spot. Early in the morning is the only time the place is empty.

I didn’t know much about Lincoln, and unfortunately due to a lame memory I still don’t know too much – but I remembered my dad saying he liked Lincoln’s leadership style (leading by communication – culling the knowledge of those around him). The reasons all there, I started the book.

The most striking thing about the book was learning that what I consider nasty political moves were happening even during Lincoln’s rise. Lincoln was the victim of political savvy (read: worthless politicians and their games) and he played the game very well himself. I suppose it could be considered naive, or maybe I just romanticized the past, but I felt like at that time things should have been simpler: you got elected based on merit alone, not on your ability to position yourself and your opponents.

The book is very readable and interesting. I have to admit I didn’t blow through it, instead I would read a lot and then put it aside until reading a lot again. I would definitely recommend it.

The nice (and bad) thing about biographies of amazing people is that they leave me feeling inspired and ready to tackle the world, and at the same time like an underachiever and lazy bum. It’s a weird mix.

Without further ado, some quotes:

Here was God’s inscrutable will at work once more, its irrationality a further test to young Lincoln’s soul, which both despised and yet yearned for the comforts of ordinary belief.

I think it would be great if politician’s today started speaking this simply and humbly, this was from a very early campaign speech of his:

“My politics is short and sweet, like an old woman’s dance. I am in favor of a national bank, a high and protective tariff, and the internal improvement system. If elected, I will be thankful. If beaten, I can do as I have been doing, work for a living.”

(Also I wonder if he intended that as a shot at politicians – only if he is beaten will be work for a living … To the victor go the spoils, eh?)

Here is an example of something that I had associated with modern politicians, using your clothing to make a political statement:

For the journey to the state capital, Lincoln wore “a very respectable looking suit of jeans,” not the highest level of fashion but in accordance with the spirit of Henry Clay’s party – to wear jean cloth was a statement of support for American manufacturers.

Like many a man who had remade himself, he falsely considered that any laborer had the same gift thus to transform himself, to become a merchant or a lawyer or at least an employer of other labor.

Child deaths were common enough for books of etiquette to advise Christian mothers how to behave when they lost their children. The Mother’s Assistant described a bad mother as saying, “I cannot lose my child, I cannot. She is so bright and promising,” whereas a good mother “leaned on the Almighty and meekly bowed her head to earthly things.”

See, he was a crafty devil! … His opponent Douglas also made a “good play to the politics of fear.”

He quietly encouraged Buchanan’s Democrats to stand up against Douglas, and he asked some of his powerful supporters to direct Republican funds toward anti-Douglas Democratic newspapers.

And more of the political machine and it’s posturing.

ABRAHAM LINCOLN, THE RAIL CANDIDATE FOR PRESIDENT, read the banner. TWO RAILS FROM A LOT OF 3,000 MADE IN 1830 BY THOS. HANKS AND ABE LINCOLN-WHOSE FATHER WAS THE FIRST PIONEER OF MACON COUNTY.
The convention went wild, and the only figure who was not delighted at such a vote-winning display was Abraham himself.

Just a very smart statement, the whole context relates to trying to talk to the South – prior to the start of the Civil War.

“I have said this so often already, that a repetition of it is but mockery, bearing the appearance of weakness.”

After the Civil War had started, and things were looking ugly.

And yet, despite his agnosticism, he had come to believe in God as a historic force. “In great contests each party claims to act in accordance with the will of God. Both may be, but one must be wrong. God cannot be for and against the same thing at the same time. In the present civil war it is quite possible that God’s purpose is something different from the purpose of either party; and yet the human instrumentalities, working just as they do, are the best adaptation to effect his purpose.”

I’d like to think, because sometimes I can be optimistic (call it cynical idealism), that if a good writer came up with a biography for the average person, anyone could look good. I say this because, intentionally or not, you’re probably bound to say a few profound things in your life. Lincoln managed to say profound things while under some small amount of stress … which is pretty good I guess.

Quotes of the Day!