If My Name Was Cloris Nightborne

I don’t know with absolute certainty, but I feel 97% confident that if my name was Cloris Nightborne I’d be a burglar. And a magician.

I would be a pretty good magician, no, scratch that, pretty DARN good, and I would be THE guy rich people would call to have come to their parties to perform magic. Sure, I’d go, I’d impress everyone, I’d banter with the best, and I’d be on my way.

Oh, what’s that, you expected me to have robbed someone of some expensive jewelry before leaving? No, come on, I’d obviously be caught. A set of homes where I am the only common denominator? What do you think this is, open mic night?

Nope. I’d be a bank robber. Way more high profile, and I could show off my magic while robbing people. ‘Excuse me miss, I’ll take all of those coins … OUT OF YOUR EAR!’

I’m driving home having changed out of my robbing clothes and into something a little more snappy smart, and a cop flashes his lights behind me.

I stop my car and wait, wondering, is today the day?

The cop leaves his car and puts his gun up, yelling, ‘Mr. Cloris – I know you’re the magic burglar!’ After a long, cautious and safe approach, I’d be in handcuffs and the cop would sigh loudly.

“Long day?” I’d ask casually.
“Oh, Mr. Cloris – you won’t believe how exciting it is for me to capture you. I don’t like you breaking the law, but I have to say, I’m a huge fan.”
“Oh, always nice to meet a fan.” I’d turn to face him, smiling, my hands handcuffed behind my back.
“Yeah, see, I was there for one of your robberies when I was a kid. You had a deck of cards and you said to this guy, ‘pick a card, any card!’ so the guy took one and you had someone else shuffle the deck, and then another guy cut the deck, and then a lady shuffled again … and then you were like … is THIS YOUR CARD … and you pulled the guys credit card out of the middle of the deck of cards!”
“Oh yeah, I remember that.” I’d say this fondly.
“Yeah, it was super cool! You even high-fived me!”
“Say,” I’d say, “do you want to see a magic trick now?”

The cop would pause then, knowing this was probably against protocol but …

It turns out a few days later he’d be fired, turns out he was monumentally incompetent.

But hey, that’s just a day in the life of … CLORIS NIGHTBORNE!

Also in case you are wondering I’d have a once a month conversation with my parents where I’d ask why on earth they named me Cloris. 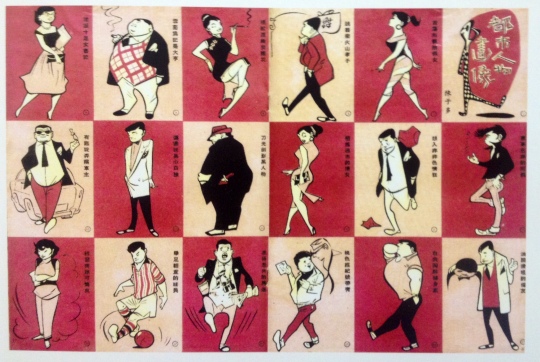 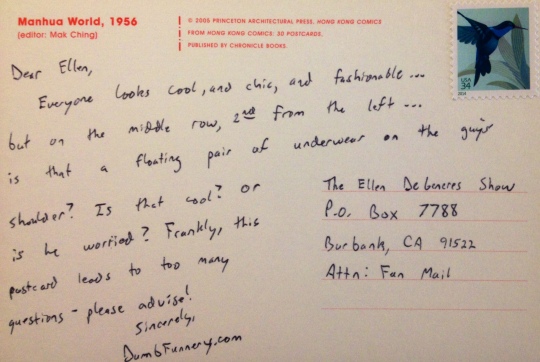 Everyone looks cool, and chic, and fashionable … but on the middle row, 2nd from the left … is that a floating pair of underwear on the guy’s shoulder? Is that cool? Or is he worried? Frankly, this postcard leads to too many questions – please advise!