Posts tagged ‘the internet is full of awesome’

The Internet is Full of Awesome: @SuperEnna

The internet is great. It’s sometimes frustrating for me, as someone who hopes to get published, to find a fantastic website because, frankly, things would be much easier if that wasn’t the case. But, while frustrating, I’m happy that there are great things online – and one of these is @SuperEnna. Or, try THIS! Enna’s got about 500 websites, so I decided to reference her Twitter AND one of her sites.

The Internet is Full of Awesome: @SuperEnna

1) If you could bring any ONE item back from any movie – what would the item be and from what movie?*

Holy crap in a hat this is a great question. Do I go for the time traveling Delorean from Back to the Future? Or go Biblical and get the Ark of the Covenant from Raiders of the Lost Ark? Or do I go perverted and get myself a chained-up hooker from Black Snake Moan? So many choices.

But I have to go with Rosie the Robot from the Jetson’s movie, because I am a lazy bitch and having a robot that cooks and cleans for me is better than 100 chained-up hookers.

2) What is your proudest blog-related moment? (i.e. compliment from a friend of friend, your blog mentioned somewhere else?)

I was being interviewed via Skype about my book (that is based off of my blog – you can buy it here www.tinyurl.com/sggrl OH DONT YOU LOVE THAT SHAMELESS SELF-PROMOTION!) and the interviewer asked how did it feel to be #8 on the most downloaded books for Kindle.

I had no idea I was even ON THAT LIST, let alone in the top ten. I told the reporter to please hold on a minute, muted the microphone, and ran around my living room screaming.

I did NOT, however, turn off my webcam, nor put on pants before I did this, so the reporter got to see a chubby white woman completely FREAK OUT in old, ill-fitting underwear. All before 9 a.m. That lucky bastard.

But, if you want my proudest blog moment of all time – it’s when a girl named Rachel made a Facebook fan group for my site. I sat at my desk at work and cried for a full twenty minutes. I am pretty sure that if anyone ever makes a wikipedia page for me, I will faint immediately and then spend the next week crying from being so happy/thankful.

3) Which would you rather fight – a zombie, a werewolf, or a vampire. (I think a zombie would be the easiest, so I’ll add in that the zombie has a knife, the werewolf has a stomach ache, and the vampire was just broken up with.)

Ok seriously a zombie is my worst fear, knife or no knife. The quickest way to get me to pee my pants is to do the “zombie shuffle” towards me and do that low moan. I will choose vampire because, due to Twilight, this seems like it would be the easiest to handle.

Since I have different blogs, I will answer for each individually:

Kosherporkchops.com: I honestly don’t know the answer to this. I guess because I have a story to tell, and in real life people find me hilarious. Not “stand-up-comedy” hilarious, but more “you-wouldn’t-mind-being-stuck-with-me-in-a-DMV” hilarious. I think I am just a well-rounded idiot. And truthfully, blogging/writing is the only thing I have ever been good at. Blogging and my romantic life are the only two things I can point at and say “Yep, I got that shit on lock.”

ForThomas.Tumblr.com: I started this blog as a Christmas gift for my cousin because I didn’t have any money to buy him a tangible gift. I said I would update it at least once a day with something he would probably find interesting. I update it on average twice a day. It was going to end on Christmas day this year, but I asked him if he wanted a “real” gift this year, or another year of blogging, and he chose blogging.

[Editor’s note: Her cousin Thomas is also mentioned in this completely crazy and awesome story.]

LettersToIraGlass.Tumblr.com: This is what I am most famous for, and I rarely update this anymore. I am deciding what to do with this site – I could just turn it into one viral NPR pledge drive, or turn it into a parody of itself. I have no clue. But This American Life picked up the blog and covered it, and suddenly overnight I was web-famous. I started this blog because I was having trouble dealing with life, and I needed an outlet. I based it off of LettersToTheEndConsumer.blogspot.com.

I used to have a LiveJournal and an OpenDiary, but that was more about my day-to-day life and I didn’t even want to read that shit. Ugh.

5) If time is moving forward, but everyone keeps looking back, does that mean the future is really just the past? (Tim Hendrik’s question from this interview).

I don’t know if this question has to do with time travel, but if it does – remember the most important rule of time travel: ALWAYS KILL HITLER. 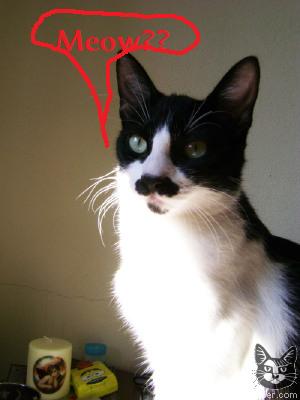 [Editor’s Note: I don’t know Enna, but I could see her attacking a Hitler cat, or Kitler, while time-traveling.]

6) Please provide a question for the next blogger interviewed.

You started your own religion and you’re the new god – what are the four tenants your followers need to adhere to?

*My work buddy L came up with these awesome questions. Though he doesn’t know this blog exists.

Big thanks to @SuperEnna, author of http://kosherporkchops.com/ for answering the questions – be sure to check out one of her 4000 creative pursuits.

And look for another interview next (month? I don’t know) with TBD!

The Internet is Full of Awesome: CorruptCamel.com

1) Based on your personality, if you were an animal, what animal would you be?

What do you mean if I were an animal? Corrupt CAMEL. Hello? McFly?

Even a baby has a super power? Can you imagine the power of that babe?
What babe?
The babe of the power.
What power?
The power of voodoo.
Who do?
You do.
Do what?
Remind of the babe.

[Editor’s Note: The movie Labyrinth freaks me out, but I am impressed/creeped out that a reference to it was at the tip of CorruptCamel’s tongue so this is my way of respecting his answer while not scaring myself.]

To remind me of the babe.

On a serious note, and because I can only keep a good David Bowie/Labyrinth joke up for so long, I blog because I like to write, I like to tell bad jokes, and I like to do the opposite of what you do with STDs, and share these things with people.

I believe it’s important to have a creative outlet to keep sane. Everyone needs a way to express themselves. Just ask Madonna. It’s also a lot of fun (or disappointing) seeing how many (or how few) people care about a given subject.

4) You’re at Chicago’s O’Hare Airport, and security has stopped you. It looks like you may be getting a strip search. Why?

Because I told security I have various narcotics shoved up my rectum. Truth is, there are only a couple of GI Joes up there, but when you have the opportunity to have the gentle gloved hands of Javier AND Beatrice poke around your nether regions, you don’t pass it up.

5) What is your proudest blog-related moment?

You mean, besides this moment?

Probably when the website started to take off a bit. I think most bloggers have visions their site is going to be overflowing with fans from the get-go, but the reality is that there are millions of blogs out there, so if you’re not advertising or offering giveaways (which I don’t), finding an audience is tough. It’s also tough when you don’t have a niche and my website is as random as they come.

I think the internet is swarming with the debris of leftover blogs that were started, abandoned and left to rot. CorruptCamel.com isn’t overflowing with traffic, but I get enough to keep me motivated and the numbers are continually growing. 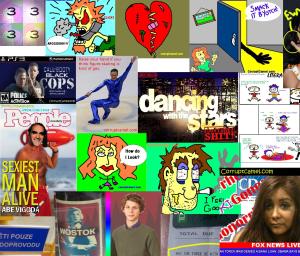 6) What opposite-sex-of-you celebrity would you want to play you in the movie-version of your life?

If she were still alive, Bea Arthur. She’s tall, strong and sexy as hell.


7) Your blog has hit it big – a million hits came in yesterday. Just as many are expected tomorrow what do you post for tomorrow?

Nude pictures of my ex-girlfriend. Finally, a large enough audience to provide the appropriate level of humiliation…Of course, I’m kidding. I’d actually post an exclusive interview with the hilarious and fantastic Brad Stanley. 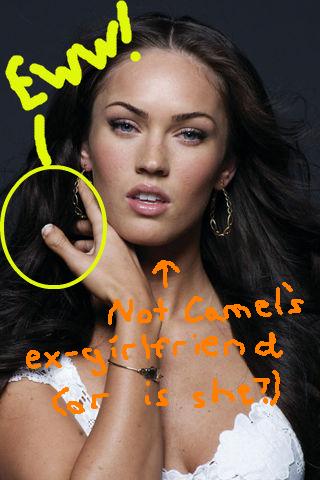 *My work buddy L came up with this awesome questions. Though he’s never seen this blog.

Big thanks to CorruptCamel for answering the questions – be sure to check out his fantastico blog here.

And look for another interview next (month? I don’t know) with …TBD! (Oooh, cliff hanger!)

The Internet is Full of Awesome: The Non-Review

The internet is great. It’s sometimes frustrating for me, as someone who hopes to get published, to find a fantastic website because, frankly, things would be much easier if that wasn’t the case. But, while frustrating, I’m happy that there are great things online – and one of these is The Non-Review.

The Internet is Full of Awesome: The Non-Review

1) Based on your personality, if you were an animal, what animal would you be? (This is not what animal you would WANT to be.)

I gotta go with a hedgehog. I prefer  the night, I can get along with just about anyone, and if I feel frightened I roll into a ball.

[Click the pic to get the joke, click the link above to view the article the pic is from.]

This is funny to me on a whole different level. I once wrote a book (that I’ve never tried to get published) with a similar theme.

I would have to say everyone else would be able to read each other’s thoughts and I would be left in a muted world.

For the fame and glory, doi. Ha ha. I went through a two year period where I stopped writing, feeling that I didn’t have enough talent. I thought blogging would be a good way to shake off some rust. Now I’ve just come to enjoy entertaining (or attempting to). If I can do that I’m a happy blogger. I’ve also made a lot of good friends in the process, which is really cool.

4) If you could bring any ONE item back from any movie – what would the item be and from what movie?*

That’s an awesome question. I’m quite greedy so I’m going to stretch the question to the limits and say Robby the robot from Forbidden Planet. He’ll provide me with everything I need from thereon.

5) What is your proudest blog-related moment?

Having Harry Harrison, one of my heroes write a review for my site. Normally the whole celebrity thing does nothing for me but my inner geek couldn’t be contained on that one.

6) What opposite-sex-of-you celebrity would you want to play you in the movie-version of your life?

Dawn French, though she is a little old for the role.

7) Please provide a question for the next blogger interviewed?

If time is moving forward, but everyone keeps looking back, does that mean the future is really just the past?

*My work buddy L came up with these awesome questions. Though he doesn’t know this blog exists.

Big thanks to The Non-Review for answering the questions – be sure to check out his very clever, funny blog here.

And look for another interview next (month? I don’t know) with CorruptCamel.com!