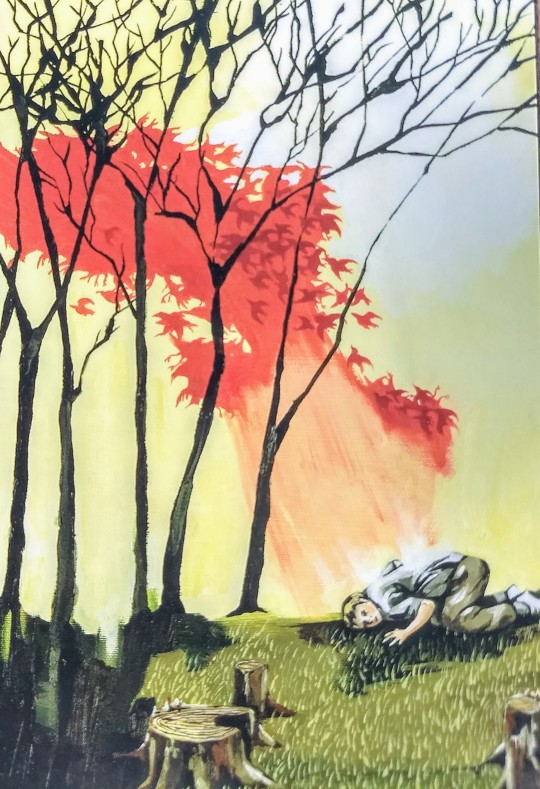 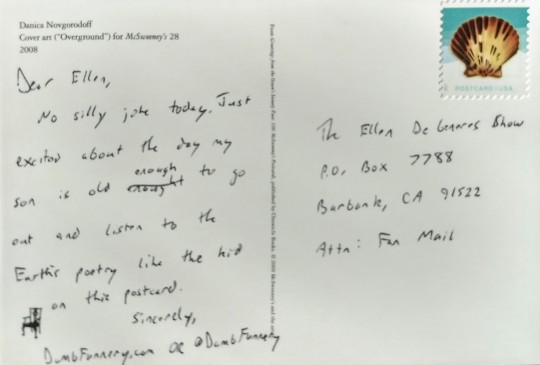 No silly joke today. Just excited about the day my son is old enough to go out and listen to the Earth’s poetry like the kid on this postcard.

June 5 (Tuesday)
Invited to lunch
“I’m trying to save money”
Offered coupon … What.

June 11 (Monday)
The kid was cough-y
So now dad needs some coffee!
… Lord I’m so tired

June 14 (Thursday)
I do love cuddles
Even if it’s one am
Which is, frankly, nuts

June 22 (Friday)
So, convertibles …
Think first one was a mistake?
“Ohhhhhh shoot … Eh, ship it.”

June 24 (Sunday)
My watch tracks my steps
And tells me trends like, ‘Sundays:
‘Did your legs fall off?’

June 26 (Tuesday)
If World Cup was real
What kind of cup would it be?
Probably sippy

June 28 (Thursday)
KID SLEPT THROUGH THE NIGHT
A RARE AND WONDERFUL TREAT!
… It was pretty nice

Welcome back. Go back to yesterday to read the first part of this if you haven’t.

I’m writing about the Houston VIP Slam Off that I attended on March 24th. I was there to support a friend of mine. The competition was to go from nine poets to four, and those four will be traveling to North Carolina to compete in a national competition. Houston is sending two teams, and this night was to crank out one of the two teams.

The MC announced that before the official competition began they would have two sacrificial lambs. This is so that the judges can figure out their scoring, and so that the first competitor doesn’t have to be the first one on stage.

The first guy got up and did a poem about love. If he happens to read this, it was brilliant and I’d give it a 10. In reality, it was a bit dark for me, I prefer more humor (go figure). The scores were on a scale of 0 to 10.0. And it was recommended that we go to one decimal point to help avoid ties I suppose.

Now, let me go ahead and tell you a little bit about how I work. Whenever I do a survey and the questions have you say you: strongly disagree, disagree, neutral, agree, strongly agree – I rarely choose one of the answers with strongly in it. It just raises so many questions for my neurotic mind. For example, what is strongly and do I really feel strongly about anything? I’d like to think I can be fairly easy-going so no I don’t strongly agree that this ATM was usable, or that this bagel was tasty. I just agree. Yeah, the ATM worked. Sure. The bagel did the job of being eaten by me. Let’s move on. Nothing strong to see here.

When I heard a scale of 0 to 10.0, my mind converted that to a scale of about 6 to 8. I didn’t want to give a really low score because that would be mean. But something above an 8 would have to be really good. In my head this was just fine.

I wrote down my score for the first guy: 6.9. I wrote it quickly and turned over the dry-erase board I’d written it on.

Across from me, sitting by the doorway, was another judge. She was the only other judge I could see the score of. The other three judges were behind me (again, I was a front-row geek). The MC told us to show our scores.

The girl across from me had given the performer a 9.9. She gave me a shocked look when she saw my score. The MC read the scores and all of them (I think), but mine were in the 9’s. Whoops. I quickly erased the score on my dry-erase board. Someone around me noticed this and laughed and said, “he’s embarrassed of his score!” I am not 100% sure if I was blushing or not, but I’d be shocked if I didn’t a whole bunch that night. Someone else said they weren’t able to copy the scores down in time and I had to write mine back.

No problem, right? I just needed to adjust my scoring? Well, the people around me disagreed. “No, you have to be consistent! Write what you think you should!” So, you’re saying you want me to be an a-hole all night? Sure, no problem.

Remember when the MC told me no one but her would see my scores? What a liar-face. People would poke around me to look at my score, and in case that wasn’t enough, the MC would look at me, sometimes point, while reading my score.

The night had 3 rounds. In the first two all nine performers went once. In the third round six went. That’s twenty-four performances. At most, four times I did not have the lowest score.

And you know what happened more often than not? I was BOOED. BOOED I tell you! I have never been booed so much. Here’s how it would go:

At the end of the first round I formed a plan. Of course! I’ll just add two points to whatever score forms in my head! 7.4’s will become 9.4’s and I will no longer be this jerk in the front row! I tell my happy plan to the girls sitting behind me (who made a habit of making fun of me with The Story Teller, and poking me occasionally to laugh at me). They seem to be ok with it. Then the MC comes back to the stage and I tell her my plan and she says, “NO! You have to stay consistent!” I turned to one of the girls behind me and said, “ok you two work this out and please just tell me what to do!”

I continued on my consistent a-holery. Or, dumbassery if you will.

The competition and thankfully my friend made the cut. I think I had ended up grading him more harshly because I didn’t want to be biased. Afterwords I was talking to him and saying how I felt like such a dick all night long. He responded very kindly (in tone, not in words),

“no it was fine! Normally the Nazi judge isn’t consistent at all but you were really consistent.”

Ooof. Without batting an eye or thinking of it as a bad thing I’d heard my label – the Nazi judge. Ouch. Nevertheless, probably pretty accurate.

The Story Teller recommended that I get up on stage and explain how my bell curve works. While everyone else is between say a 7 and 10 I operated between a 6 and 8. We joked that Rainbow Speak would operate between a 99.0 and a 99.9. 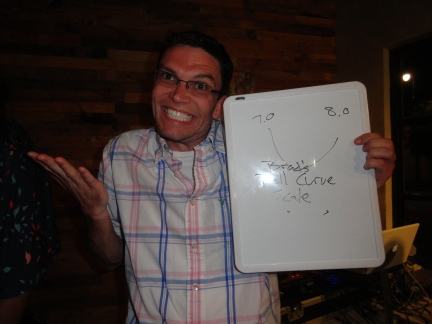 Overall, I really didn’t enjoy being a judge. I felt like a jerk all night and, seriously, I got booed. But, it was still pretty funny, and my friends had a blast. It was very cool to see my buddy TFO perform, and I’ve included a YouTube video below of one of his performances.

Hope you enjoy it! Feel free to judge him as harshly or kindly as you like with no fear of public repercussion! It’s life’s simple pleasures like that, you know?

Check out more items from my “What Have I Done?” bucket list!