The Day the Earth Stood Chill

You know what would make a terrible horror movie, but a terrifying real world experience? If everyone you came across in a day was incredibly nice, friendly, and chill.

It doesn’t sound scary – but imagine how frightening that would be.

You go to work and everyone there is just … happy, or fairly content. What about that one dude who seems like he’s always on a personal call complaining about something with his house or the dog or something? 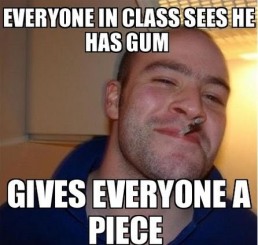 Guys like this would be a dime a dozen. Color me petrified.

What about that quick trip to the grocery store and it’s crowded and everyone just looks … cool with it?

What about traffic on the way home? You look over to see someone bobbing their head to some Jack Johnson music.

I don’t know about you, but I would assume everyone had been abducted by aliens and been brain-washed. It would be a hair-standing-on-end, why is the world so scary, oh man oh man oh man I’m scared … kinda day.

I was browsing through other blogs on WordPress based on tags I like and I found this. It’s a site, microhorror.com, and they’re having a 500 word limit horror-story contest. The theme is ‘space’ … not as in outer space, but as in ‘the physical dimension.’ I’m no good at horror stories, but I started to think – ‘what are scary situations involving space?’ This is what I came up with.

This is kind of a throw-away post. I’m going to have a new computer soon which I’m super jazzed about. Why? I’m going to get a slick video editing program and produce amazingly dumb videos. Even dumber than you’ve already seen – you didn’t know this was possible, did you?

It was a dream come true. All the hard work, all the effort, the schooling – It had, after all, been worth it.
He was an astronaut now.
He was taking his first space walk.
“Hey,” the astronaut stopped at the communication, “what’s with your helmet?”
The astronaut looked down to see something that seemed insignificant, a tiny bit of nothingness in the infinitude of space.
There was a small gap in the visor which kept it from closing all the way.

The three engineers who designed the helmet would be saddened and shamed if they knew what was happening – but at the moment they had their own problems.

One of the engineers behind the design of the astronaut’s helmet was having his own problems with space. He was on a date and quite nervous – the proverbial social skills-challenged brainiac.
The engineer was in the middle of a seemingly 15-point turn to successfully park.
“Just park away from other cars, I like walking,” the date said, trying to help.
“Oh … right …,” the engineer managed with a weak smile and a nervous chuckle.

The second engineer had just parked and run inside a gas station.
His bladder had run out of space.
What’s worse – so had the bathroom.
After his quick knocks an angry yell from inside rang out, “gimme a minute!”

The third engineer couldn’t have been happier.
He and his girlfriend were ‘taking the next step’ in their relationship.
He was a smart young man and of course used a condom. A condom that was designed, like the helmet, to not have any gaps.

The astronaut, full of panic and yet curious, said, “so much for that exploding head myth.”
While he chuckled and began looking to solve the problem at hand, his lungs ruptured.

The engineer on a date backed up to find a new spot, and hit a man.

The engineer in the gas station re-lived his worst day in second grade.

The engineer with his girlfriend became a father-to-be.

And some infinite being we can’t comprehend chuckled.

6/17/10
I don’t really like scary movies, and zombie flicks are included in that. I have an active imagination, and I don’t need any fuel to scare the crap out of me.

I decided to be tactful about it, so I got a zombie flick and a sad human flick, that involved people dying. We watched the human flick, ‘Saving Private Ryan’, and the zombie cried during certain parts (that’s a sad movie!).

I thought, ok, yeah, crying makes sense. So then we put in a zombie movie, and he cried (as far as I could tell) an equivalent amount. I didn’t know what to do, but it was sort of contagious, so I cried a little too.

I think I won’t be watching another zombie movie for a while.