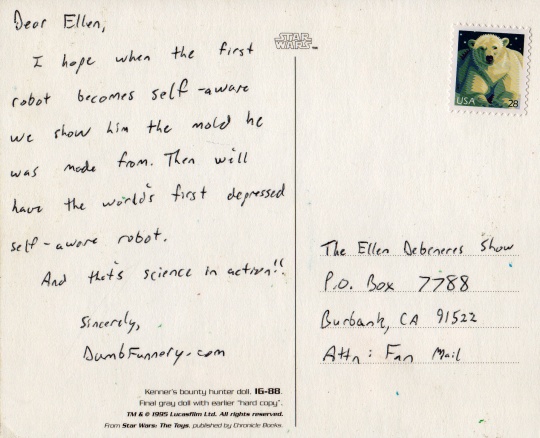 I hope when the first robot becomes self-aware we show him the mold he was made from. Then we’ll have the world’s first depressed self-aware robot.

And that’s science in action!!

This week I’m in Florida with my parents to see the space shuttle launch.

If you hadn’t already noticed, I am a geek. I am jazzed to see the shuttle launch.

My plan is to post some while I’m there … we’ll see how that goes. Either way, I’ll be sure to post nonsense when I get back. Though I have a strong feeling I’ll be talking to the girlfriend unit and sister while on the trip, and with my mom … so there goes about 95% of my readership.

This leaves you, Hendrik!

Anyhow, here’s the scariest thing I could think to post. 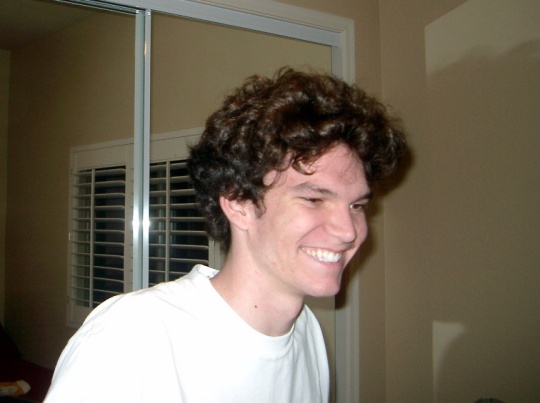 That hair could eat a man. Oh wait, it did.

Sticking with the trend of announcing that I do online dating – I’m going to announce a few other geeky facts about me. I hid these things from most people, but no more!

Maybe it’s that I work with uber-geeks, so these things almost seem normal to me … but here goes.

In elementary school, grades 3 through 6 actually, my favorite thing was heading to my friend Mike’s house and playing a Star Wars role-playing game (RPG to those in the know). This wasn’t a video game, this was actual dice. HELL YEAH!

Mike’s older brother would sort of MC the event, the ‘dungeon-master’ of sorts (yes, I just said dungeon master). We used Star Wars Micro Machines to set the stage visually. You know, roll the dice, you walk X spaces … move the little guy. Someone looks suspicious, I use my charisma (yep) and manage to find out they’ve got a thermal detonator (that’s right) in a bag. Apparently a Hutt (I went there) has that guy in a bind. Look at that, geekiness.

In fact I remember one night Mike had a group of guys over to spend the night. I was a year younger than Mike so that always made me feel out of place and uncomfortable, so David (the older brother) and I did this RPG game for a chunk of time. I could justify it by thinking, ‘well David was bored, I’m being nice and entertaining him.’ Really I just wanted to play Star Wars, and didn’t want to hang out with Mike’s friends. A win-win.

Seriously, playing that was a blast.

You see, if I am working on something a lot, and then I go to bed shortly after that – it gets into my dreams. Normally I don’t remember my dreams at all. It’s only if I wake up suddenly that anything occurs to me.

But one night in college, and for a while during this one thing I was working on in California (what a very specific description, huh?) – I dreamt code. It wasn’t anything good, and it didn’t make sense, but I would wake up and have visions of lines of code.

One night I woke up quite suddenly and very vividly this line was in my head: “the answer is k.” That night I dreamt about math equations.

Do you know how terrible it is to dream about math equations, and code?

You are yourself, and you expect/hope to be normal – so I think my way of looking at things/thinking is how everyone works. I know now that this isn’t exactly true, but it still is beyond my mind to grasp how other people approach/see/analyze things. However, I really enjoy seeing the differences – which shows my non-engineering side.

My dad is an engineer also (am I technically an engineer? I don’t know. I’m computer science, so take that as you will) – so my family had a joke email file downloaded on our computer. I remember listening to this thing in either middle school or high school. It was a sound byte with a serious sounding man talking to a concerned mother. The mother was concerned about her son’s social skills.

Actually I was trying to remember this, and I figured ‘why not Google it?’ and wha-la! I found it! Apparently it was from Dilbert. See it here –

I don’t have the take stuff apart/figure out mechanical things really … but I do have the social aspect of it. And, if nothing else tells you I’m geeky, it’s that I found that Dilbert cartoon very funny.

I’ll end with this little story. It’s a favorite of my family’s about me.

When I was X years old, I took all of my toys and … what else would an X year old do? I lined them up, in pairs, from biggest to smallest (generally not in size, but still the line was there) starting in my room and heading out to the hall.

I asked my mom to described this, since I don’t remember it, and she said, “oh, that was just the way you played – you were very … methodical. It wasn’t just trucks, it was everything  you had. They all had to line up.”

Also, we had a maid at that time. I apparently got very upset when she messed with my line of trucks/cars. From my mom, “she may not have understood your words – but she understood what you were after.” (i.e. Don’t mess with my line.)

See that? Doomed from a young age.