This is a book idea I have which I have yet to do anything about. I don’t think it’s particularly clever or genius of me to have thought of this, it’s maybe already been done as a plot, so I figured why not toss it out there. If it inspires you to write something, please post a link to that in a comment, I’d enjoy reading it.

Imagine, if you will, a large company. This large company does a lot of different types of work for a lot of different customers so it has the ability to build any of a large number of items. Say this company gets a contract with the Department of Energy, and it takes some of its own money reserved for research and development projects, and it builds a large building in the middle of a nowhere farming land. As part of this building there is housing built in because this project will involve an oil rig setup (i.e. the workers will live where they work while on duty) and the project happens to be an automated farm. Crops, livestock, you name it, it’s enclosed in this high-security building that is sufficiently isolated (it’s a government contract and they of course don’t want corporate espionage or foreign spies taking their intellectual property).

This large company, in the name of savings, is also going to house another project here which is an effort with DARPA or the Navy or whomever and that effort is automated machine gun turrets/missiles/etc – things that tell others who aren’t welcome that they are really. not. welcome.

Now the company, with its fortified, self-sufficient building of unknown level of floors underground with top secret projects that are doing this and that has decided to release some simple robots. One robot folds clothes. One robot retrieves clothes. One robot stops you from leaving without paying for clothes. One robot is an interface for you to pick out clothes (for a robot to retrieve) and then allow you to pay for them.

What a trendy way to shop at a Gap in San Francisco, or an Urban Outfitters in Chicago, or any other number of stores where these are unveiled.

And now the company, with its fortified, self-sufficient building has decided to release some more simple robots. One flips burgers. One cooks fries. One retrieves sodas.

What a trendy and space-saving, cost-saving (that’s passed on to the customer!) way to shop at a Burger King in New Orleans, or a McDonald’s in Detroit, or any other number of stores where these are unveiled.

People are of course upset but they’re only looking at the downsides (i.e. a trend which is predicting 50% of jobs will be replaced by simple robots that cost less than paying one employee one year’s salary, and these robots don’t care about higher wages, and they’ll last for 10 years). The upside is that the corporations care about the education system here in the United States and they want to help their local politicians campaign because those politicians that they back support more programs to help ‘temporarily displaced’ workers go to school to learn a skill that is not so easily replaced by efficient robots.

The people vote – it’s those who care about saving America and representing people vs those who want to help America move forward and gosh, aren’t these lines minimal and these cost savings great? And hey, aren’t these ten commercials of his to every one of that other guys pretty convincing? Despite the insistence that these robots be rolled out slowly to allow a natural shift in industry the voters have spoken and the robots are being deployed (guess who the most efficient employees of FedEx, UPS and the USPS are?) to different stores nationwide.

It may also be worth mentioning that the company that manufactures the machines that record and tally votes is also in on the big robot production game (what big company wouldn’t be after seeing the fruits of those labors).

Now, what do we have here? An enraged mob of freshly unemployed Americans, some of whom are now conspiracy theorists and think the vote was rigged, and a sort of job/class warfare society.

P.S. I work on software, so I’m all for things being automated. But it’s ‘fun’ to think about dystopian future kinds of story setups. Plus, Stephen Hawking will soon be doing a Reddit AMA and a teaser for it is him talking about the idea of robots one day outsmarting us.

I hope when the first robot becomes self-aware we show him the mold he was made from. Then we’ll have the world’s first depressed self-aware robot.

And that’s science in action!! 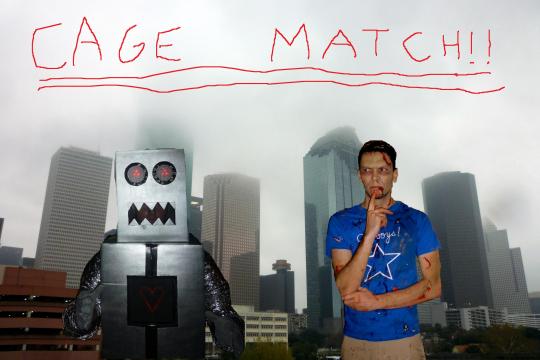