You know what’s ironic? If you say to someone, “I don’t really like trick questions … Do you?,” that person will assume it’s a trick question.

Hello to all you mothers out there! I hope you had a lovely day, and that you will have a fantastic rest of the year.

When I was very little I was crazy about GI Joes (they’re still really cool). GI Joes themselves were obviously cool. The cartoon I watched about GI Joes was cool. Even commercials for GI Joes were cool! My brother’s GI Joe comic books? I never read them, but had I done that, undoubtedly cool.

It’s no surprise, then, that I wanted to create a cool atmosphere for playing with the GI Joes.

In some toy commercials the toys are shown outside in swampy areas, or in a lake, or in some woods. Well, what if you can’t play outside at that moment? You bring the woods and lake inside, DUH!

My mom, when she discovered the mess I had deliberately made, was not on board with the idea. She probably was a bit confused.

So, let’s hear it for the moms, who may sometimes think they are surrounded by tricksters … but really, we’re just goons. Calvin, take it away. 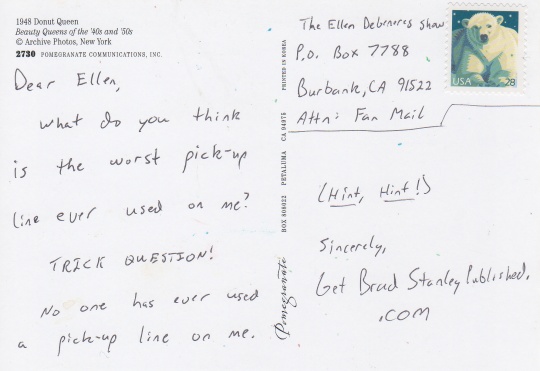 As an FYI, the postcard is from some hip shop in downtown Houston.

What do you think is the worst pick-up line ever used on me?

No one has ever used a pick-up line on me.