First, a fun fact. Did you know that city names that end in -pur (like Jaipur, Udaipur) have Hindu roots whereas towns that end in -bad (Islamabad, Ahmedabad) have Muslim roots. I don’t know what you’ll do with that, but it’s interesting, eh?

In case you saw The Best Exotic Marigold Hotel, it was filmed in Jaipur and Udaipur (the next stop on Lauren’s and my grand tour). As part of the fancy shopping we would do, we heard many phrases that would indicate how expensive the items were (as I talked about in this postcard). The funny part was that, in addition to price-increasing phrases like ‘dying art,’ shops would establish their credibility by mentioning the celebrities who had shopped there. In Jaipur, due to The Best Exotic Marigold Hotel, the celebrity of choice was Judy Dench (a really down-to-Earth person apparently). I don’t know if the celebrity cred was due to us being American (perhaps British guests get told about the types of fancy tea a shop has), but it was entertaining.

We departed Ranthambhore and arrived in Jaipur after an interesting drive. We went from dirt roads with potholes so big the word hole isn’t big enough, to a pristine highway-type road with a median covered in beautiful flowers. All the while passing the usual mix of colorful trucks, and random vehicles of all types. On the way to our hotel we passed by a community of people living in tents, this setup was in the city but not in the inner city area. Not more than ten minutes later we arrived at our hotel. The mix of colors, sights, sounds and tastes in India is also accompanied by a mix of emotions – India is not a place where I could imagine much self-pity happening, because around every corner is someone who appears to have a life much tougher than you could imagine.

After the hotel arrival we spent the day admiring our surroundings, including some of the most beautiful flowers we’d seen. I had not associated India with flowers before going, but now a beautiful flower will always take me back to that beautiful country. 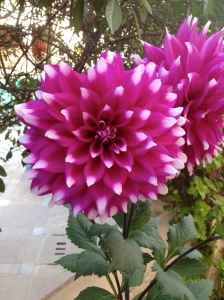 The next day was a full one. We met our guide, who we really enjoyed, a doctor and professor (talk about feeling spoiled) who was easy to talk to and seemed to know about everything we talked about. We met up with him around 9 am and were with him until perhaps 9 pm. Dr. A first took us by Hawa Mahal, which is a site you’ll see if you Google Jaipur. It’s a facade, a giant wall of windows for women to look out of while festivities and men went parading by below on the street. (The place I was talking about in this postcard.)

Jantar Mantar – these are some of the sign-specific devices.

From there we visited Jantar Mantar, which was just plain cool and I still want to look up the math behind it. First, there were structures built that could tell you the time of day which is accurate within twenty seconds (even today!, and this was built in the early 1700s). Not satisfied with this, they built a version 10 times larger, making the time accurate within 2 seconds. Pretty good. In addition, there are instruments which tell you what sign you are, and specific clocks for each sign. So, how could you build a giant sundial 90 feet tall to accurately tell the time within 2 seconds? Why, you build the angle of the sundial at 27 degrees, the latitude of Jaipur of course! How did someone know the latitude of their city in the 1700s? You got me.

After the astrological instruments we saw the City Palace. This palace, like many others, had rooms dedicated to seasons which would cool or heat better – so you would live in the monsoon season room during the month or two a year of monsoon season, then the cooler room during summer and the warmer room during winter. What can you say, it’s good to be royalty.

Walking around Jaipur – I wish I had taken close up pictures of all the colorful powders for the upcoming diwali festival.

Inspired by the astrological instruments, we met with an astrologer who, among other qualities, has an @aol email address. Adorable. The process was fascinating. Lauren went first, sitting to his left, and she wrote down her birthday, time of birth, and I think a few other facts. He asked a few more questions, and then with a magnifying glass took a good long look at her hands, her face (“close your eyes please”), had her look up and away to study her … neck/ear?, and then another good look at the hands. All the while making notes on his pad. The notes looked to be scribbles in this object in his notebook that was on every page – apparently marking something in one corner vs another has significance. If you hadn’t guessed, I’m not a big believer in the stars being able to tell me about myself or anyone … And yet, what he said was pretty accurate. He told us a few things about ourselves on the spot (when it was my turn I had to switch seats with Lauren to be on his left) and then we also got emails with a full write up. 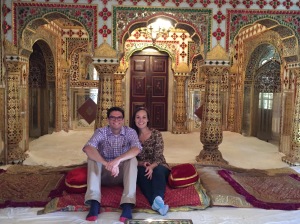 In the Jaipur City Palace!

Among many of the unexpected items in the email, the border is all swastikas. In India (and many other countries) that symbol is not associated with the Nazis because it was well-established before those dopes came along and tarnished the symbol for a lot of western countries.

After the astrologer and lunch, we had time for shopping. I bought a tailored jacket (how swanky) and Lauren bought a ring with the stone that would help maximize good energy (according to our astrologer). The ideal thing is to have your stone touching your skin, but if that doesn’t work you can carry it in your pocket or some such thing like that. I declined to buy a stone since I’d never wear it, and because I’d just bought a blazer for myself.

Approaching the farm where our elephant ride happened.

We then spent some time in a coffee shop with the good doctor, where he and Lauren talked books (with Lauren’s extensive India reading to prepare). We left India with a list of movies and books we should dive into to get a better idea of India.

From our coffee and chit chat we headed to Amber Fort where we removed our shoes, my belt and Lauren’s purse (because it was made of leather) and we headed to a Hindu temple in the fort. The doctor told us that we could get a blessing and that this would entail having a drink poured in my hands which I would then drink. Ok, sure, I’m game. In the temple the good doctor led us to a priest who put the red marking on our foreheads (tilaka), put a garland around our necks, and into my hands went this drink. I tipped my hands and woah, for a culture that does not really drink, that is one strong drink. Then with my hands still wet I was to pat my head at the top and sort of comb down. Because Lauren did not also drink I was told to pat her head as well. Then as the good doctor spoke to us he asked us to continue to face the priest’s direction.

With our pal, the elephant!

Leaving there we walked around Amber Fort, learning about it. We were now not only dorky, tall, extremely noticeable white people, we were also adorned with flowers and the tilaka … I felt like a dork.

After Amber Fort we did what anyone would do – an elephant ride. The ride itself was … bumpy. But feeding the elephant a banana and just standing near it was amazing! What a giant, awesome animal!

A room in our hotel which featured beautifully painted walls. The hotel was 175 years old and built as a residence for the rulers of Samode.

As you’ve noticed I’ve gotten more brief as the day has gone on but that’s because it’s Friday morning and I’m about to shower and go enjoy the day!

High: Too many! Jaipur was amazing – the astronomical devices, the meeting with the astrologer (just watching him work was awesome, the whole setup was bizarre and fun to me), the elephant encounter and of course our guide.

Low: A silly one, but I had pictured Lauren and I each on a different elephant by ourselves … Having now been on an elephant and seen how they can walk where they want and don’t care how much you yell at them in your local language (like our elephant driver guy did) – I understand that each of us going solo would have actually been quite terrifying.

Often our hotels knew it was our honeymoon and would have a little cake waiting for us in our rooms which was awesome. The spelling errors were a secondary delight.

Do you think, in the animal community, the song ‘Baby Elephant Walk’ is a source of pride or shame for baby elephants?

I could see it going either way.

“Hey this song is for me! … Wait, is that what you think when you see me walk? Am I that goofy looking?”